All known gibberellins are diterpenoid acids that are synthesized by the terpenoid pathway in plastids and then modified in the endoplasmic reticulum and cytosol until they reach their biologically-active form. All gibberellins are derived via the ent-gibberellane skeleton, but are synthesised via ent-kaurene. The gibberellins are named GA1 through GAn in order of discovery. Gibberellic acid, which was the first gibberellin to be structurally characterized, is GA3.

GA has a number of effects on plant growth, but the most dramatic is its effect on stem growth. When applied in low concentrations to a bush or "dwarf" bean, the stem begins to grow rapidly. The length of the internodes becomes so great that the plant becomes indistinguishable from climbing or "pole" beans. GA seems to overcome the genetic limitations in many dwarf varieties.

Gibberellins are involved in the natural process of breaking dormancy and other aspects of germination. Before the photosynthetic apparatus develops sufficiently in the early stages of germination, the stored energy reserves of starch nourish the seedling. Usually in germination, the breakdown of starch to glucose in the endosperm begins shortly after the seed is exposed to water. Gibberellins in the seed embryo are believed to signal starch hydrolysis through inducing the synthesis of the enzyme α-amylase in the aleurone cells.

In the model for gibberellin-induced production of α-amylase, it is demonstrated that gibberellins (denoted by GA) produced in the scutellum diffuse to the aleurone cells, where they stimulate the secretion α-amylase. α-Amylase then hydrolyses starch, which is abundant in many seeds, into glucose that can be used in cellular respiration to produce energy for the seed embryo. Studies of this process have indicated gibberellins cause higher levels of transcription of the gene coding for the α-amylase enzyme, to stimulate the synthesis of α-amylase.

Gibberellins are produced in greater mass when the plant is exposed to cold temperatures. They stimulate cell elongation, breaking and budding, seedless fruits, and seed germination. They do the last by breaking the seed’s dormancy and acting as a chemical messenger. Its hormone binds to a receptor, and Ca2+ activates the protein calmodulin, and the complex binds to DNA, producing an enzyme to stimulate growth in the embryo.

A major effect of gibberellins is the degradation of DELLA proteins, the absence of which then allows phytochrome interacting factors to bind to gene promoters and regulate gene expression.Gibberellins are thought to cause DELLAs to become polyubiquitinated and, thus, destroyed by the 26S proteasome pathway. 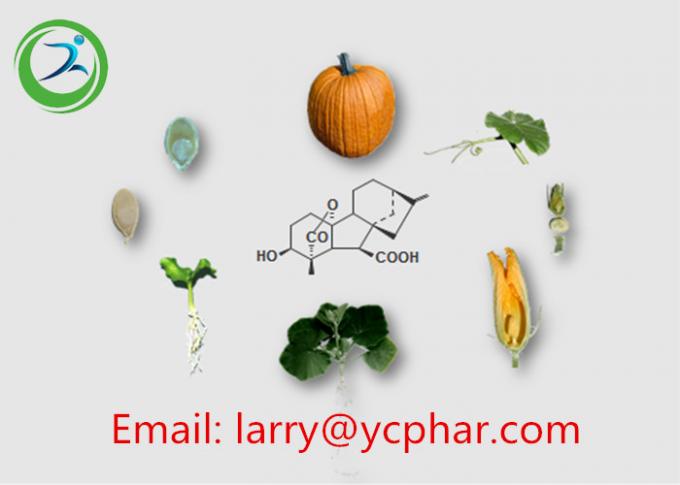