MK677 is a drug which falls somewhere between two separate groups of drugs, growth hormone

Human studies have shown MK677 to increase both muscle mass and bone mineral density, making it a

promising therapy for the treatment of frailty in the elderly. Ibutamoren MK677 also alters metabolism of

body fat and so may have application in the treatment of obesity.So the bodybuilding community uses

MK677 stacks for cutting and bulking to great effect.MK677 also works to boost IGF-1 by as much as

89%, which helps to provide a raft of other benefits too such as improved healing.

How MK677 is administered:

MK677 is very popular with those who don’t like injections because it has an oral bioavailability. This

means it can be taken by mouth without causing any toxicity to the liver, or being metabolized too quickly

The recommended dosage of MK677 is 5-25mg daily, taken in a 10-week cycle. It may be necessary to

adjust the dose to continue to get optimal results and in some cases up to 50mg has been taken, but

that’s not generally necessary or advisable.

The liquid form should be squirted straight into the mouth and chased down with water or juice. It shouldn’t be mixed before drinking.

The half life of MK677 is 24 hours so you’ll only need to take MK677 once a day. The most common route of administration is the liquid form, taken on an empty stomach first thing in the morning, every day.

Those who take MK677 suggest that it’s almost impossible to gain fat while taking the drug, so strong is its fat loss effect.

You can stack MK677 with other SARMs such as cardarine or andarine for a fat-burning cycle which is incredibly potent, or take MK677 alone and you’ll still achieve a shredded appearance. The other benefit is that MK677 packs on lean tissue so even if you’re on a calorie restricted diet, you will still hang on to your muscle.

MK677 is a very powerful drug which can be used for both cutting and bulking to great effect.

However, the drug has very few, if any, interactions so can be run alongside other compounds including

HCG, SARMs and anabolic steroids. Therefore if you want to create a MK677 super stack, you can expect some of the best results possible.

1. Endurance: Stack it with 20 milligrams (mg) a day of cardarine for a lethal endurance stack, and blow away your competition on your next bicycle/road race.

2. Fat loss:stack it with andarine and cardarine to get a lethal fat burning triple stack.
3. Mass gain:stacked with LGD and anabolic steroids
4. Overall health:Stack it with N2guard, Ostarine and HCGenerate ES to get a perfect stack for those who have let their bodies go due to injury

Because of the interaction with IGF-1, MK677 can provide phenomenal results on a bulking cycle.

IGF-1 is the only hormone that can create new muscle cells, so MK677 will help to pack on serious mass

rest of the cycle. It’s a compound which delivers fast results without compromising on the quality.

A bulking cycle often means accumulating an increase in body fat temporarily, but that isn’t the case with

MK677. You won’t be piling on unwanted fat that you’ll need to later shed making it perfect for bulking

either on its own or in a stack.

MK677 works by promoting the release of growth hormone in the body. It manages this by stimulating the

affect the fat cells directly. Instead, the increase in lean tissue comes from the calorific depositions into the muscles, avoiding fat storage completely.MK677 also has the effect of decreasing the appetite plus increasing the basal metabolic rate.

Unlike anabolic steroids, there’s a whole plethora of beneficial side effects including a better complexion,

a general sense of well-being.

For bodybuilders, the benefit to taking MK677 is greater lean mass and lower fat stores.

MK677 also naturally pushes up IGF-1 which increases fat loss and muscle gains, tightens loose skin and heals old injuries, ligaments, tendons and bones. IGF-1 is expensive and difficult to administer, by taking MK677 all the benefits of IGF-1 can be gained, without the same problems or the high cost.

Although MK677 side effects aren’t as bad as those experienced with an anabolic steroid, it’s not without

increase in appetite and for some users, MK677 is no exception.

When the compound is first started, prolactin may increase so individuals who are sensitive to this effect

may need to run HCG alongside it at the start.

Only a small percentage of individuals will be sensitive to prolactin, typically around 1%. As a general

guide, if you suffer gyno effects when you take trenbolone, you’d be wise to run HCG with MK677.

Is it safe for women to use?

There’s no androgenic effects from the use of MK677 which means that it won’t virilize in women.

This means that MK677 is safe for women to take. Similar doses to men can be used, but due to the large amounts of growth hormone produced, starting with 10mg is recommended.

Will PCT be required?

Although MK677 is often grouped with SARMs, it doesn’t affect the body in the same way, bearing a closer resemblance to some peptides instead.

In particular, MK677 doesn’t cause any suppression of hormones or testosterone, a real benefit for

bodybuilders. This means that there’s no need to carry out any PCT, even a mini-version. 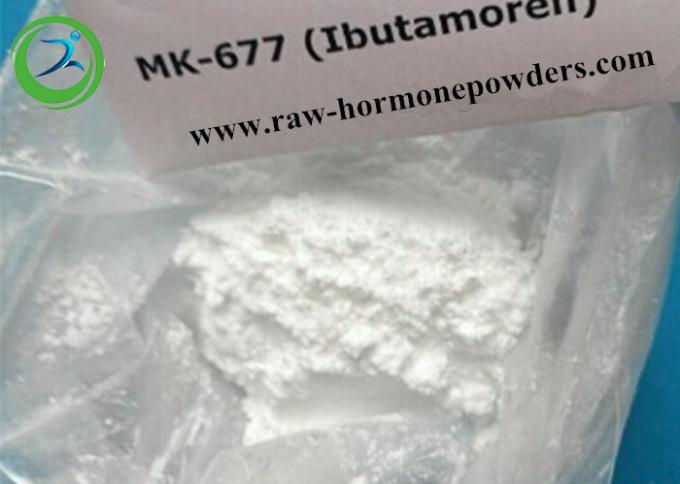