Detailed Product Description
99% Bimatoprost White Powder To Control Glaucoma CAS 155206-00-1
Product Name: Bimatoprost
CAS: 155206-00-1
MF: C25H37NO4
MW: 415.5656
Assay: 99%
Appearance: White powder
Bimatoprost is a prostaglandin analog/prodrug used topically (as eye drops) to control the progression of glaucoma and in the management of ocular hypertension. It reduces intraocular pressure (IOP) by increasing the outflow of aqueous fluid from the eyes.The cosmetic formulation of bimatoprost is sold as Latisse. In 2008-2011, at least three case series suggested that bimatoprost has the ability to reduce adipose (fat) tissue.
Medical:

Bimatoprost is used for the treatment of open-angle glaucoma and ocular hypertension in adult patients, either alone or in combination with a beta blocker(typically timolol).

Studies have shown bimatoprost to be more effective than timolol in reduction of intraocular pressure (IOP) and as least as effective as the prostaglandin analogs latanoprost and travoprost in reducing IOP.

Cosmetic:
In patients using ophthalmic prostaglandins such as travoprost and latanoprost, it has been noted that there had been an increase in diameter, density and length of eyelashes. A study published in May 2010 found that bimatoprost in a gel suspension, when applied at the base of the upper eyelid eyelashes, significantly increased eyelash length.[citation needed] Allergan initiated clinical trials investigating the usage of bimatoprost as a cosmetic drug.In 2008, the FDA Dermatologic and Ophthalmic Drugs Advisory Committee voted to approve bimatoprost for the cosmetic use of darkening and lengthening eyelashes.The medical term for this is treatment of hypotrichosis; however, the FDA approval is for purely cosmetic purposes (see Prostaglandin F receptor#Clinical Significance). 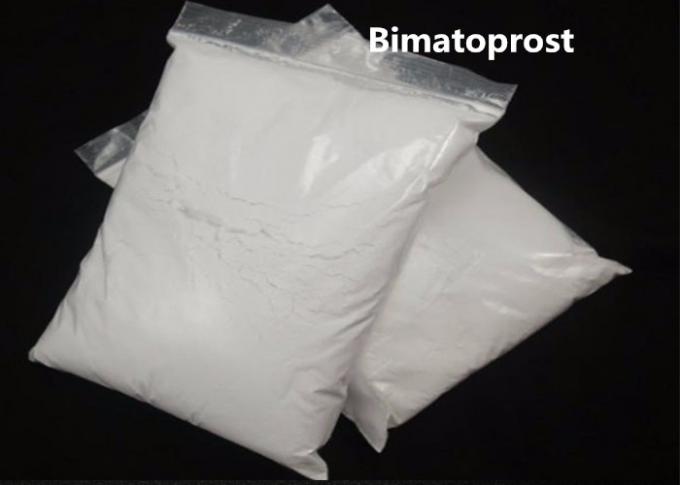