PRL-8-53 is a nootropic research compound first synthesized in the 1970’s by Dr Nikolaus Hansl while working at Creighton University. The compound takes its name from creator’s company Pacific Research Labs who were also the (now expired) patent holders. Very little research on this compound is available online. What is available appears to have been conducted by the old patent holder.

The single study involving humans showed PRL-8-53 improved word recollection scores both 24 and 96 hours after initial memorization. Given the low amount of evidence available for this nootropic, we thought it relevant to reference a journal article in which the creator discusses the compound and numerous other human trials it was used in.

Anecdotal reports for this seem favorable, though in the absence of reliable published research and data for prolonged use in humans, it’s not something we can recommend.

Important Information:
PRL-8-53 In A Nootropic Stack:
The limited research for this nootropic suggests that it’s memory enhancing. The compound creator also discusses other benefits, which we cover below. Given the low amount of research on this compound and an unknown mechanism of action, we can’t advise on what to stack this with. If you do decide to experiment with it, consider taking PRL-8-53 without other nootropics to reduce possible interactions.

Dosing PRL-8-53:
The single published human study used 5mg of PRL-8-53 and found it enhanced recall on a word-remembering test. The patent for the compound mentions an oral dose of 0.01mg/kg per dose, taken 3 times per day.

PRL-8-53’s Structure and Absorption:
PRL-8-53 is derived from benzoic acid and phenylmethylamine. The compound is a benzoic acid methyl ester. We’re unable to find any absorption data for this compound, though it can be assumed to cross the blood brain barrier.

Benefits of PRL-8-53:
Memory:
The single published study for PRL-8-53 shows a slight improvement of word acquisition during a memorization task. Participants were given 5mg of PRL-8-53 2 hours prior to testing and then were then asked to listen to a recording of 12 words in a particular sequence and recite them at future time points (shortly after testing, a day after and 4 days after). Minor benefits were found for immediate acquisition, but an over 80% improvement was noted for people tested later on who had initially scored poorly for the test (6/12 words correctly or below) .

Unpublished (Possible) Benefits - Geometric Pattern Exercise:
Interestingly, the compound creator also discusses other trials which appear to be unavailable or unpublished. In a Journal published in 1978, Dr Hansl mentions that PRL-8-53 statistically improved scores in a geometric pattern cognitive exercise. Participants were shown a series of geometric patterns and ask to draw them from memory, a statistical improvement was noted.

Verbal Fluency Test:
Dr Hansl discusses a test where subjects were asked to form words from a series of letters and dots. For example “U.R.” had to be turned into any word by adding letters at the start and end of the word, while replacing the dots with a letter. “U.R.” could be “current” for example. A statistically significant improvement was found in participants who had taken the drug.

PRL-8-53’s Mechanism Of Action:
The mechanism of action for this nootropic is currently unknown but may, in part, lie with cholinergic mechanisms. Dr Hansl, the creator of the compound discusses in the Phi Delta Kappan journal that PRL-8-53 enhances brain’s the response to acetylcholine, and the compound is not a stimulant . The patent for PRL-8-53 mentions cholinergic mechanisms. 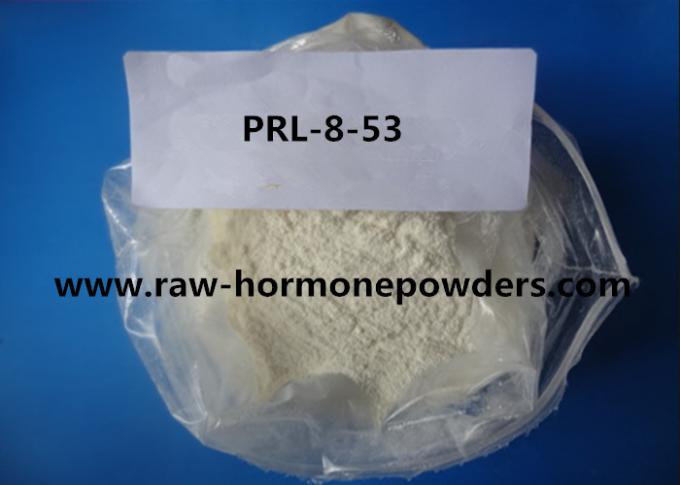