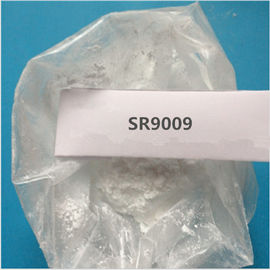 SR9009 shows increased endurance and reversal of mitochondrial damage in studies.SR9009 has great

promise in increased exercise capacity and endurance. This compound acts as an agonist of Rev-erbα.

SR9009 binds to one of the body’s natural molecules called Rev-erbα, which influences lipid and glucose

metabolism in the liver, the production of fat-storing cells and the response of macrophages (cells that

SR9009 led to increased metabolic activity in skeletal muscle in both culture and in mice. The treated mice had a 50 percent increase in running capacity, measured by both time and distance.

metabolism, fat loss and sugar level of a person. It won’t be surprising to see SR9009 offer the same

benefit as Cardine (GW-501516). Considering the fact that Stenabolic is effective when used solo or

stacked, this means it will be an excellent supplement which can be taken alongside any steroid or SARMS cycle, and will enhance a user’s performance when combined with Cardarine.

enhance cholesterol level of the body. SR9009 is efficient especially when used alongside steroids like

Trenbolone and Anavar in performing Cholesterol and Cardio management.

SR9009 is often dubbed as “exercise in a bottle” so it’s perfect for any cutting cycle. If you’re trying to get

shredded and lean, the improved endurance means that you’ll be able to train for longer even if your

calorific intake is low. This, together with the natural fat loss properties of SR9009, means that it’s much

During a cutting cycle it can be tricky to hang on to mass. However, SR9009 naturally creates muscle

cardiovascular exercise, you won’t shed too much bulk.

Although the drug is superb for cutting, SR9009 is also useful for bulking.

Studies showed that mice could run 50% longer and faster, a huge increase in stamina. Being able to

exercise for longer means that it’s possible to train harder and more intensively, which in turn also

depending on user preference. And it is must be dosed 3-4 times per day.Regarding the cycle duration,

for a double dose of endurance power.

So far, no side effect caused by SR9009 has been identified. It can then be rightly said that the

supplement is very safe to consume. SR9009 does not influence the hormones in any way and so won’t

aromatize into the estrogen, and won’t suppress the production of testosterone. Just like other

supplements like SARMS, SR9009 does not deposit toxins in the liver, though it is needful for there to be

some supplements that will support the liver when using it. 3 to 5 capsules of N2Guard taken every day

will serve as good support to the kidney and liver.

There are no current indications that SR9009 is not safe for women, Caution is therefore recommended