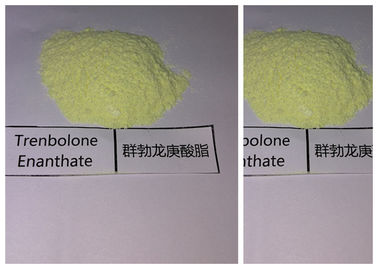 cycling and bodybuilding activities.Trenbolone Enanthate (Tren E) is good for strength boosting and

increasing your lean muscle mass. The ester in this case- Enanthate- enables the trenbolone to be slowly

released into your body.

powerful than testosterone. Trenbolone Enanthate popularity has been attributed to its cutting and bulking properties.And most people will find Trenbolone Enanthate to be satisfactorily effective within the 300 mg- 500 mg per week range. It’s normally best taken in 2 even doses per week for the single total weekly dosage.400 mg per week is generally considered quite a solid dose. And yes, you can make use of more, especially if you’re a good responder, though most find getting much past 500 mg per week somehow side-effect friendly.

Regardless of the dosing, most find eight weeks to be well effective with twelve weeks of Trenbolone Enanthate use being

generally as far as you’d wish to go.

The main difference between the two subjects is actually esters. Trenbolone Enanthate is featured by relatively less esters and peaks slowly, leaving the system slowly. On the other hand, Trenbolone Acetate has more esters, peaks comparatively faster and also leaves the system faster.

The acetate form is well-known to promote cutting while the enanthate one is used in adding muscle size. If you’re a beginner to this world of anabolic compounds, it’d be far wiser to opt for Trenbolone Acetate than Trenbolone Enanthate since it’ll get out of your system conveniently quickly.

The enanthate form of Tren is however, rarely associated with insomnia, night sweats and over-aggression, thus allowing you to reap the optimum benefits of steroids. It is less likely to cause the dreaded Tren Cough. Trenbolone Enanthate involves less pinning, although its use will demand patience given that results can take more time.

The Steps to make injections:

2. Place this powder into the glass beaker.

3. Add the desired oil into the other glass beaker using the 50mL syringe and heat it in a bath of hot waterto around 80*C or 180*F.

4. Transfer this oil into the beaker with the powder.

5. Use the 3mL syringe to measure your BA and then add it to the oil

6. Use the 10mL syringe to measure your BB and then add it to the oil

7. Stir this mixture with a glass rod or with an 18g needle

8. When fully dissolved, draw as much as you can into the 50mL syringe and then attach the syringe filter

to it and then an 18g sharp needle to the end of the filter unit.

9. Swab the top of your sealed vial with an alcohol pad and insert the 25g-27g needle into the vial. This

will act as a vent.

10. Now insert the syringe/filter unit into the vial and begin filtering.

11. NEVER draw backwards through the filter, it will destroy it.

12. You may need to unattached the syringe from filter unit (leave the unit still in the vial) and draw the

rest of the AAS/oil mixture into the syringe then re-attach it and proceed to filter it.

13. Once all the oil is filter through, unattached the syringe from the filter unit and draw in 50mL of air. Re-attach it and push this air though. This will get every last drop of the oil out of the filter membrane.

14. Remove the syringes from the vial. Your finished.

15. Now observe this for a day or two to see if it crashes. If not then your good to go.