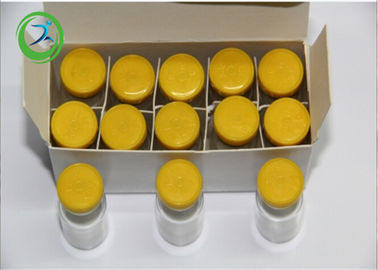 So, why would bodybuilders or athletes want to utilize Sermorelin over other peptides that have longer half lives like MOD GRF (1-29) or CJC 1295 with DAC? To put it simply, you could easily work this into a multi-dosing protocol along with you other long acting GHRH's and GHRP's. Let's look at Sermorelin's known positive effects like: increased lean body mass, reduced fat, increased strength, improved recovery, better sleep, strengthenining of the heart, enhancing of the immune system and increases IGF-1 production. Yes, while the ability of Sermorelin to act is short, it still promotes all of these factors stated above. Not to mention it also has the ability to increase protein synthesis, promote growth of all internal organs with the exception of the brain and promote and increase in liver glucogenesis. Despite its tiny half life, Sermorelin's ability to increase IGF-1 in the blood stream will only further increase the function of the metabolism and the growth of new cells in muscles, bones and organs. Sermorelin is heavily pushed by HRT clinics and is often referred to as the anti-aging peptide since it is very good at reversing some of the effects of aging in adults. The fact that doctors can legally prescribe this peptide helps HRT clinics further their legitimacy and also offer a viable and more cost effective solution to prescribing exogenous HGH.